Bridgette Chambers, Ph.D., is an American Business Association award-winning executive, turnaround expert, growth strategist, and successful business author. Chambers has been recognized more than a dozen times by the American Business Association, including Turnaround Executive of the Year, Maverick of the Year, and Female Executive of the Year. Chambers is a proud member of faculty with Mays Business School within Texas A&M University.

Chambers released the Amazon bestseller Profitable Problem Solving™ in 2015, and co-authored From the Court to the Boardroom in 2017 with four-time gold Olympian and Naismith Memorial Basketball Hall of Fame member, Lisa Leslie.

Chambers received her undergraduate degree from the University of Houston, her MBA from Texas A&M, and her Ph.D. from NorthCentral University. Chambers proudly began her career in leadership by enlisting in the US Army Reserves and later the Texas Army National Guard.

About Chambers workshops and speaking:

In addition to speaking extensively about Profitable Problem Solving™ strategies for executives and entrepreneurs, Bridgette has successfully delivered nearly one hundred keynotes on the following topics: 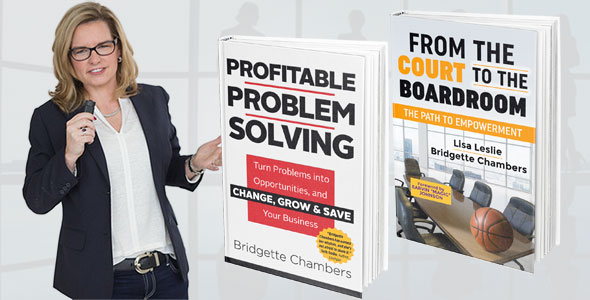